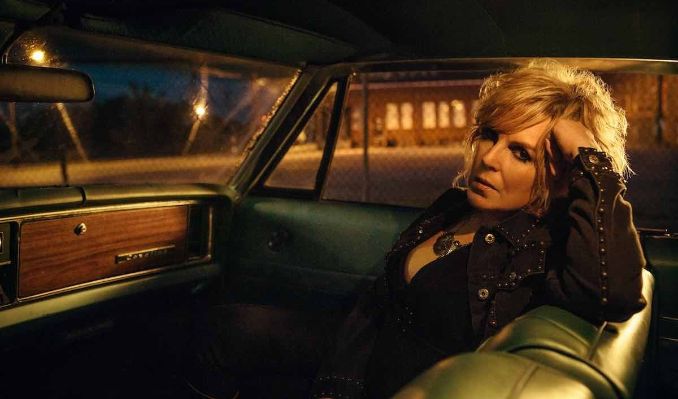 The Ghosts of Highway 20

We’ve all heard about the iconic vibe of Route 66, the neon lights on Broadway and the ocean air of the Pacific Coast Highway. But there are untold stories emanating from countless blue highways across the land – like Interstate 20, which cuts a 1500-mile swath from South Carolina to Texas, and cuts deep into the spirit of those who’ve spent their lives traversing it.

Lucinda Williams is one of those people, and with the expansive, enveloping The Ghosts of Highway 20, she brings those stories to life – and gives listeners a remarkably vivid look at how the highway has been a literal and figurative backdrop throughout her entire life. The intensely involving 14-song collection may be the most deeply felt, deeply affecting work of Lucinda Williams’ illustrious 35-plus-year career, a career that has been established on a foundation of remarkably personal songs.

“It is literally a map of my life in a lot of ways,” says Lucinda. “We were driving between shows and between cities, and I kept seeing things that brought me back to times and places in my past. Like when we played in Macon, Georgia, a place I lived when I was five or six years old, I got out of the bus and I was transported back to when I saw this street singer, Blind Pearly Brown. It was like nothing had changed. All these things started percolating in my brain, and the songs just came.”

The thread of Highway 20 connects those songs, mirroring the winding route of the road itself, a street that cleaves close to Williams’ childhood homes, the final resting place of her mother, the sites where signposts of her formative years are forever planted.  The connection runs deep here, particularly on the dark and moody tones of the album’s poignant title track, on which Lucinda ponders the lives that were lived, the legacies that were left and the imprints that remain on her own soul, conveying those vignettes with a palette that’s nuanced enough to give the listener pause to ponder, but unvarnished enough that her message is impossible to miss.

She cuts closest to the bone with “Dust” (a song built around a poem written by her late father, poet laureate Miller Williams, whose “Compassion” she interpreted on 2014’s Down Where the Spirit Meets the Bone) and “Bitter Memory,” a bracing consideration of times gone by, one that doesn’t sugarcoat things with the usual veneer of nostalgia. Lucinda continues down that path with “Louisiana Story,” a sequel of sorts to her classic

“Baton Rouge” that captures its faded Delta setting with a wizened beauty. “I didn’t want to repeat myself, but I kept coming back to the story I was telling there,” she explains. “I wanted to describe, like a photograph of what I recall back then – the humming of the fans, the tar sticking to the bottom of my feet when I went out to play and other vivid recollections that I’ve never forgotten from that time.”

The sense memory is strong here, in Lucinda’s storytelling, and in the interplay between the musicians, notably guitarist Bill Frisell (who last joined her on Down Where the Spirit Meets the Bone). His intuitive, incisive playing – especially in tandem with fellow guitarist Greg Leisz, adds sunshine and shadow, darkness and light, sometimes within the same passage. That pair underscores the heretofore unheard tenderness that Lucinda brings to the lullaby-gentle “Place in My Heart” and a palpable layer of grit to a surprising version of Bruce Springsteen’s “Factory” (a darkly pensive Darkness on the Edge of Town tale about “Men [who] walk through these gates with death in their eyes,” an image that fits seamlessly into the album’s hyper-real depictions of life).

“I know people throw the word around a lot, but this is one of the most organic things I’ve ever worked on,” says Greg Leisz, who co-produced and played guitar on the album. “There aren’t any overdubs, there’s no sweetening, it was the musicians getting into a headspace and bringing the songs to life. We were ecstatic to see how the whole thing came together, how [Lucinda] reacted to seeing the process unfold. It was a one-of-a-kind experience.”

Lucinda Williams has been maneuvering down a path all her own for more than three decades now, emerging from Lake Charles, Louisiana, where her iconoclastic upbringing helped her forge the stunning Lucinda Williams (aka, the Rough Trade album). Somehow, that milestone 1988 set eventually disappeared from shelves, but was reissued 25 years later, as a deluxe edition that garnered unanimous acclaim — including Jim Farber of New York’s Daily News hailing it by calling it “A perfect work. There’s not a chord, lyric, beat or inflection that doesn’t pull at the heart or make it soar.”

For much of the ‘90s, Lucinda moved around the country, turning out work that won immense respect inside the industry – as borne out by the Grammy afforded Mary-Chapin Carpenter’s interpretation of Williams’ “Passionate Kisses.” While her recorded output was sparse for a time, the work that did was invariably hailed for its indelible impressionism – like 1998’s Car Wheels on a Gravel Road, which notched her a second Grammy Award. Over the next decade, she crafted such classic sets as West (2007), and Blessed (2011), which the Los Angeles Times dubbed “a dynamic, human, album, one that’s easy to fall in love with.”

Lucinda credits the injection of vitality and passion that emerged in part to Tom Overby, her partner in both life and music, who’s acted as both a sounding board and collaborator, contributing production ideas and offering encouragement to forge forward in directions that she might not have otherwise explored. That creative connection has grown increasingly electric over the years, as borne out by 2014’s Down Where the Spirit Meets the Bone, which Blurt’s Fred Mills referred to as “A snapshot—or feature-length film, take your pick – of a woman fully renewed and at the height of her creative powers.” The album won the 2015 Americana Music Association Award for Album of the Year.

The Ghosts of Highway 20, which has its roots in the sessions that produced that last outing, takes things even further. Williams stretches fearlessly here, experimenting with jazzy vocal phrasing that’s reminiscent of Van Morrison’s more adventurous offerings, and giving full voice to her literary side – which has its roots in childhood encounters with Flannery O’Connor (who her late father called his “greatest teacher”). The most dramatic example of that freewheeling spirit arrives at the close of the album – in the form of the 13-minute “Faith and Grace,” a churning groove powered by the drumming of Jamaican legend Carlton “Santa” Davis (best known for his work with the late Peter Tosh) and Jamaican hand drummer Ras Michael, whose haunting vocals add to the track’s intensity.

“That song does sum up what the album is all about for me,” says Williams. “It isn’t a jam, it’s a groove, and I just got into the room with those guys and went off. I had no idea what I was going to do, but I went with it, we all went with it, and it felt so spiritual, so real. It surpasses anything I’ve ever done, I think – and it makes me really excited about where I could take things in the future.”

FacebookOfficial WebsiteAmazon
*Service and handling fees are added to the price of each ticket.
Buy Tickets